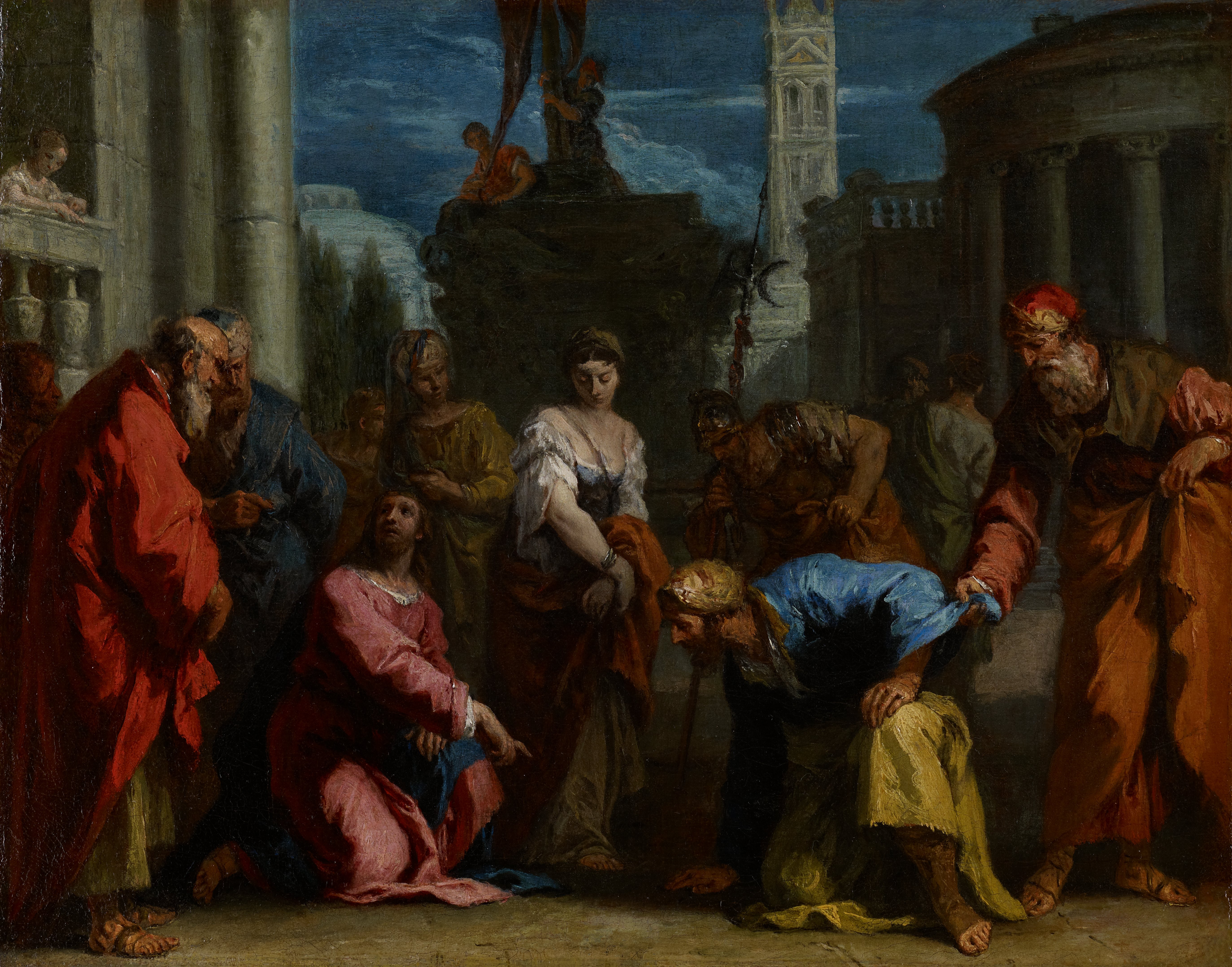 Christ and the Woman Taken in Adultery, Sebastiano Ricci, 1720’s

‘… but we preach Christ crucified: a stumbling block to Jews and foolishness to Gentiles’

If you have been keeping up with the news, you know all about the College Admissions scandal that has shocked the nation. Allegedly, the rich and powerful were able to get their children into prestigious universities by directing money into a fake charity. Allegedly, coaches were bribed, private SAT and ACT proctors were bribed (and sometimes took the exam for the students), and involvement in high school sports was faked.

What a scandal! For those who have tried everything to get their child into one of these institutions, the injustice is enraging. Where is the fairness?

Such a scandal needs to be corrected. Heads have to roll. If they don’t, then the whole system of applying and getting accepted into universities will be meaningless. The integrity of the system appears to be broken. The only fix is to take all of this to court.

Paul uses the phrase, ‘stumbling block’ in 1 Corinthians 23. That phrase is only one word in the Greek. That word is Skandalon. In other words, the Jews who heard that the Messiah was crucified on the cross were scandalized by the notion of it. The Messiah was God’s chosen Savior. He was coming on a white horse with sword in hand to rescue God’s chosen people from oppression; especially the oppression of Roman rule.

And, they were right, in a sense. The Savior was coming to free them from oppression. But, He wasn’t coming in on a white horse with a sword in His hand and an army following. He was coming on the foal of a donkey with nothing but His hands to be crucified by members of the oppressing army. Defeated, lowly and weak, what kind of a Messiah was this?

The Jews were scandalized. They had forgotten all of the Servant Songs in the latter portion of Isaiah. They were indicted by their own scripture. Yet, gentiles don’t get off the hook in Paul’s estimation. They saw the crucifixion as ‘foolishness’ (the Greek uses the root of the word ‘moronic’ here).

Here is how Paul completes his thought in 1 Corinthians:

26 Brothers and sisters, think of what you were when you were called. Not many of you were wise by human standards; not many were influential; not many were of noble birth. 27 But God chose the foolish things of the world to shame the wise; God chose the weak things of the world to shame the strong. 28 God chose the lowly things of this world and the despised things—and the things that are not—to nullify the things that are, 29 so that no one may boast before him. 30 It is because of him that you are in Christ Jesus, who has become for us wisdom from God—that is, our righteousness, holiness and redemption. 31 Therefore, as it is written: “Let the one who boasts boast in the Lord.”

Paul, then, turns the whole thing upside down. It might even be a little bit scandalous. I don’t like to be called unwise or foolish. That’s offensive.

When we place our faith in the ‘righteousness project’, we are actually denying Christ. Instead, look up to Christ who, as the author of Hebrews encourages us to, ‘… fix[ing] our eyes on Jesus, the author and perfecter of faith …’ That is, Jesus is both the one who birthed faith in you through the external word, and who completes the work through the external word. As Paul writes in Philippians 1:6:

‘… he who began a good work in you will carry it on to completion until the day of Christ Jesus.’

This might be the greatest scandal of all because there is no “lifting oneself up by the bootstraps”. Instead, from start to finish, Christ does it all. Even  more scandalous than that, Christ said from the Cross, “It is finished”. That is, before you were even born, before you great-great grandparents were born, Christ complete all the work at the cross for you.

Now, that scandal is your salvation. Abandon the self for goodness and righteousness before God. Look to the cross, and know that Jesus has done it all. For the scandalized, for the scandalous, for the cheaters, for those who play by the book, for the righteousness project managers, for the foolish, for the wise, for the Jew and for the Gentile. It is finished. For you.